Shimmer & Shine is one of the latest entries into the increasingly inventive world of animated series. Released in 2015, the first season features 20 episodes while the second, released last year, has 33 episodes.

Broadcast on Nickelodeon Junior, the series is extremely popular with children. In the first season, the action plays out mainly in the human world.

Lea, a little schoolgirl, has friends like no others: Little genies called Shimmer and Shine. Every day, they give her three wishes. However, these are usually not granted as intended, and the three characters end up spending their day untangling the difficulties that arise.

The second season of Shimmer & Shine takes place mainly in the world of the genies, Zahramay Falls. Lea hides the genies from her neighbour Zac during the first season, but ends up showing them to him in the second.

Zac then has his own genie, Kaz, and other characters appear too: Princess Samira, Roya, Zeta, and so on.

Shimmer & Shine has been a big hit with little girls, thanks to their colourful and enchanting world. The colourful clothes inspired by the series area also a big draw. As a seller of girls' clothing, you need to get the latest Shimmer & Shine licensed clothing into your collection now. To get them at discounted prices, visit our wholesale clothing store now. 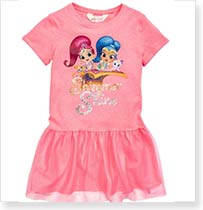 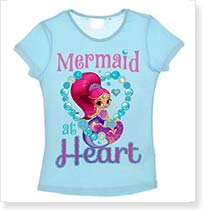 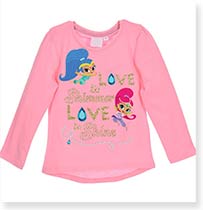 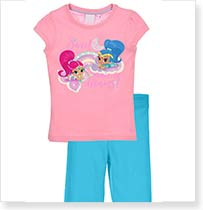 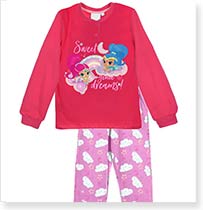